As these watches are , as we all know, quite rare and good information is sketchy I tried to piece together the puzzle with whatever info I could find . This is by no means a definitive investigation and I welcome any and all remarks .

As I have done these investigations for some rare Breitling references as well , and the conclusions on those investigations still stand today after many years , I applied the same logic and thinking to the early Autavia’s . You may not agree with all assumptions that I make but please bear with me , and if you have any info that will disprove my assumptions please share that info as I will gladly change and/or broaden the investigation . If all this info is readily available somewhere and I am not saying or posting anything new, I just wasted a lot of time writing this down, but please remember why I started this “ I recently acquired a ‘1st exec’ Autavia 3646 with some question marks”

What I will try to answer in this Hypothesis are a few things:

–: serial number ranges (production runs = number of watches made)
–: Executions , for me an execution means a change from a previous version
–: Hands and Dials use sequence

Assumption: What I have found in other investigations for a similar brand (Breitling) is that Manufacturers (Mfg’s) ordered a set amount of cases (batch) for a production run. As setting up tooling (drilling, lapping, polishing, stamping etc) machines is a lengthy are therefor expensive process Mfg’s ordered a set number of cases. Too low and the cost per case would be too expensive , too high and you were not sure whether or not you’d use them all. In the case of Breitling I found that they typically ordered batches of 1000 pieces. These cases came in per-serialized as well as serialization was done by the external company . I also found that FIFO (first in / first out) was not used . I am going to assume that Heuer used the same assembly process.

Q: Were hands and dials then also ordered in the same amount ?
A: I have found they were not, as cases were very labour intensive to produce and therefor you needed large(r) amounts to offset the initial cost , hands and dials are fairly easily (= cheaper) produced. Dials are printed and lumed , hands are stamped and lumed. So these were ordered in (much ?) lower Qty’s than the cases .

Now, what did I do exactly ?
First gather as many reference and serial numbers I can find , mainly from here http://thoughts.onthedash.com/thoughts/registry-early-autavias/ but I have been scrounging serials from everywhere on the interweb , incl approaching ppl that showed early autavia’s on IG etc and also taking into account the recent eBay offerings (#49374 & #52826)

The next step was to see if I could order them by serial number , I could , but I had to take 2 serial numbers out . These were already labeled as ‘strange outliers’ on the OTD website so I assume there’s something weird with these (maybe assembled from different parts ? ) . Anyway , when I took the outliers out and sorted them the serial numbers came out like this , in 4 distinct batches

If we are going to take my assumption as correct , and Heuer ordered batches of cases , it looks like Heuer ordered 500 of each case in the 1st production run (this can be expanded to 1000 ea if more serials turn up)

(btw , does anyone notice how the 3646 actually was ordered first ? , or at least made first , in both instances ?)

production numbers for the 1st production run can be expanded to 1000 pcs and still not overlap the pre-carrera 50600 serial .

Now that we established how many there were made, what did they actually look like ?
We all seem to think that the 1st production run of the 3646 and the 2446 were released with the ‘full lume’ hands. And I concur as the evidence , earliest known advertisement from November 1962, points to that . 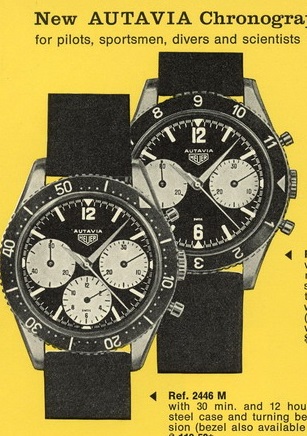 Now given the fact that it takes time to take pics of watches, design a catalog, send them to the printer , make print examples, review them for mistakes etc (2 to 3 months ? ) I think its fair to say these pictures were taken July/August of 1962 ? And I believe I heard somewhere that the Autavia was released in summer of 1962 ? (anyone has an exact date ?) I think these pics are the earliest known versions . So concluding , the ‘full lume’ hands are indeed the 1st ones and I would call them the ‘1st execution’

The next catalog we have is the 1963 catalog with pricelist , this catalog however was printed also in 1962 , as is normal for a 1963 catalog because if you would print them in 1963 they’d arrive (very ?) late in stores.
As I can only assume the pics of these watches were taken after the 1st exec ones , I am going to assume this catalog was printed in November or December of 1962 so pics taken 2 or 3 months prior to printing ie Sept / Oct 1962

Now this is where it gets strange , as these hands are different ? And I was initially led to believe that these were 2444 hands that ‘someone’ put on watches during service as the original ‘full lume’ hands were no longer available. I have found however a 100% untouched 1st execution watch with serial number in the 489xx range with these hands. Which leads me to conclude that in the 1st production run of the 3646 and 2446 (see serial ranges above) there were 2 different hand designs . One of the worlds leading experts in Vintage Heuer confirmed the correctness of these ‘Thin stripe lume’ hands for the 1st production run , as did a well renowned watchmaker that used to work for Heuer 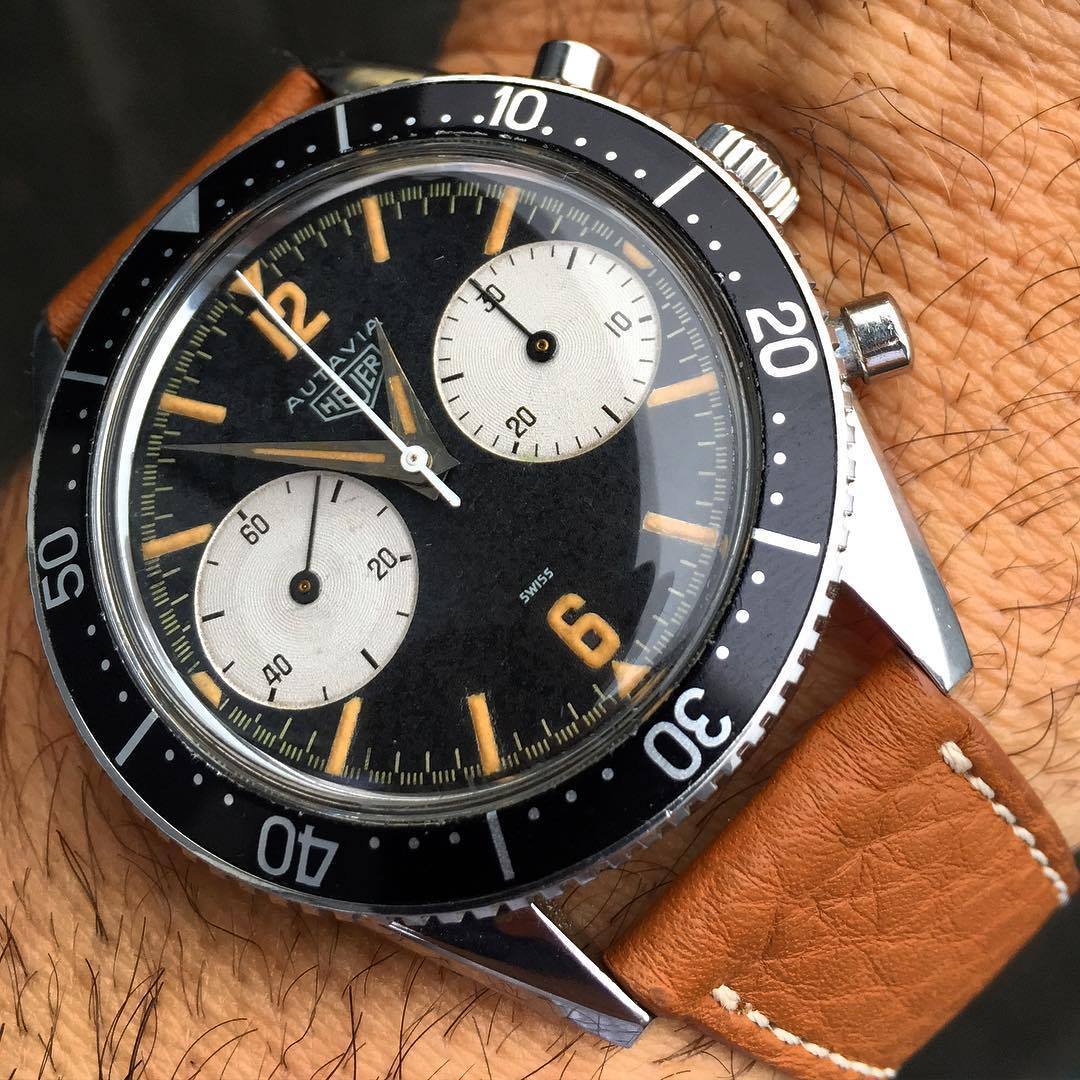 And there are even (up to now 5) pieces known and confirmed to be 100% genuine by one of the worlds leading experts in Vintage Heuer, that were originally delivered with a RED instead of white Chrono hand. 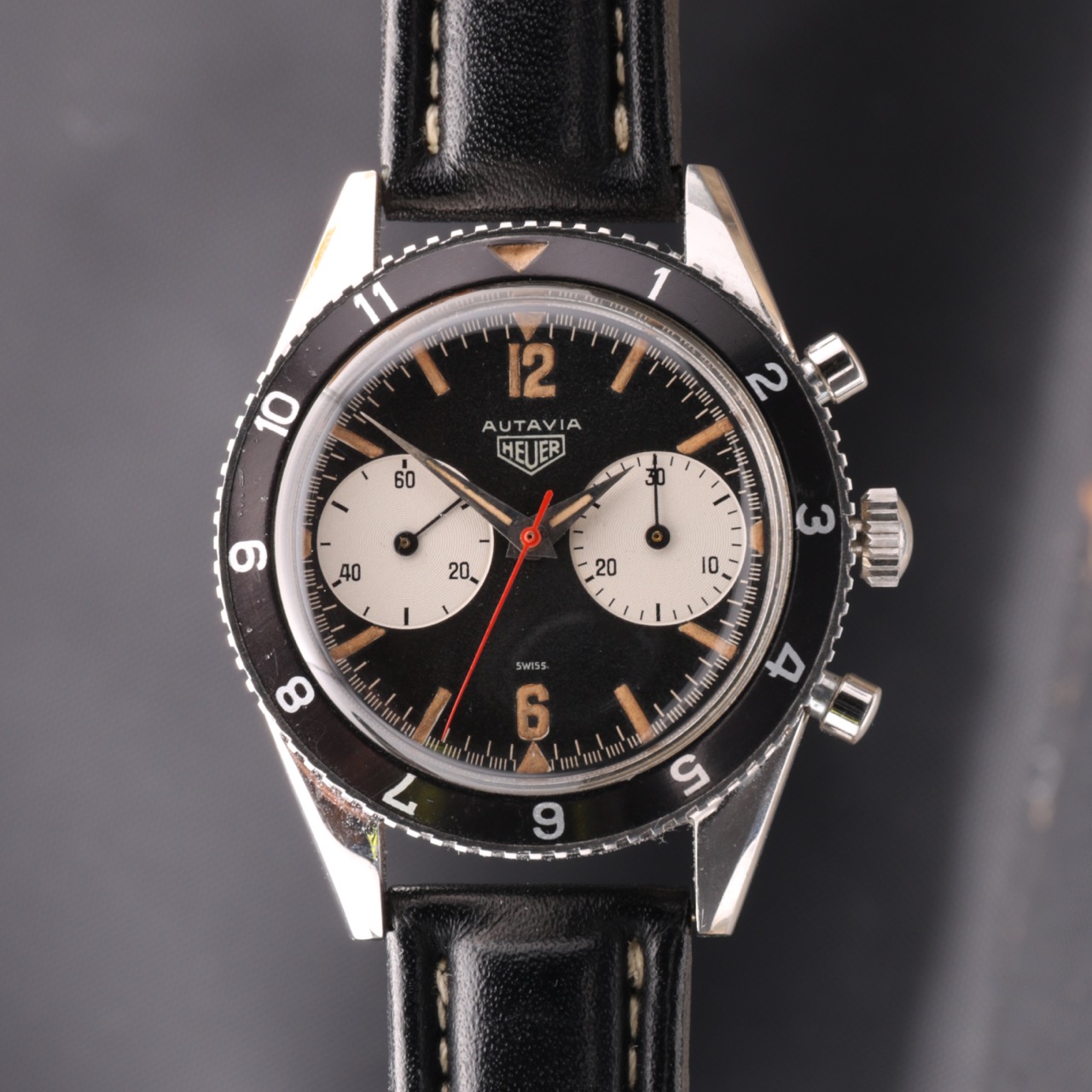 The ‘Full lume’ and the ‘Thin stripe lume’ , are both correct for the 1st production run

But do we call these 1st Executions and 2nd Execution ? , If I use my own definition of an execution they would be 1st and 2nd , but I would settle for ‘1st and 2nd generation hands’ I will however leave that up to the wider collector community to decide .

There are several other kind of hand types found on watches that fall within this 1st production serial number range . I do not know at this time if I would call them correct or incorrect , fact is that these hands (thin mirror edge larger lume dauphine hands etc) are not documented anywhere but maybe someone that has handled a lot of these watches can make that call ?

Personal note: I do not believe the ‘Thin Stripe Lume’ hands are exactly the same as for the 2444 and other pre-carerra watches but this needs further investigation

For me this concludes the investigation of the 1st production run of the 3646 and 2446.

Now the 2nd production run that, as far as I know, start with serials

Investigating these is a bit harder as (afaik) there is no printed material showing these 2nd production run 3646’s and 2446’s , so I did my best by taking the biggest sample with parts in common

Dial 3646 : 1st the 3646 received a newly designed V92 movement , now sporting a 45 minute counter instead of the 30 minutes previously used (I would call these 3rd Execution 3646 because of the hand and movement change ?) 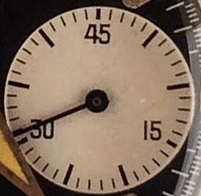 Dial 2446 : seems to have stayed the same and is unchanged for the 1st production run

Hands: There are several other kind of hand types found on watches that fall within this 2nd production serial number range “Thin mirror edge larger lume dauphine hands” in various shapes and sizes and variances between 3646 and 2446 , these are not documented anywhere but maybe someone that has handled a lot of these watches can make that call ?

Predominantly we see these types of hands on the 3646 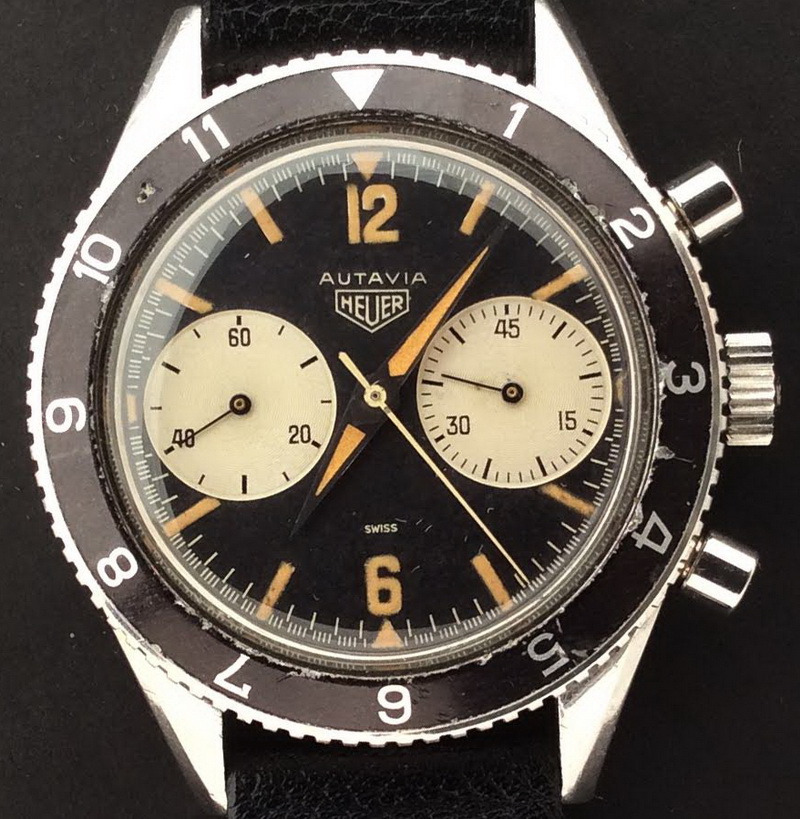 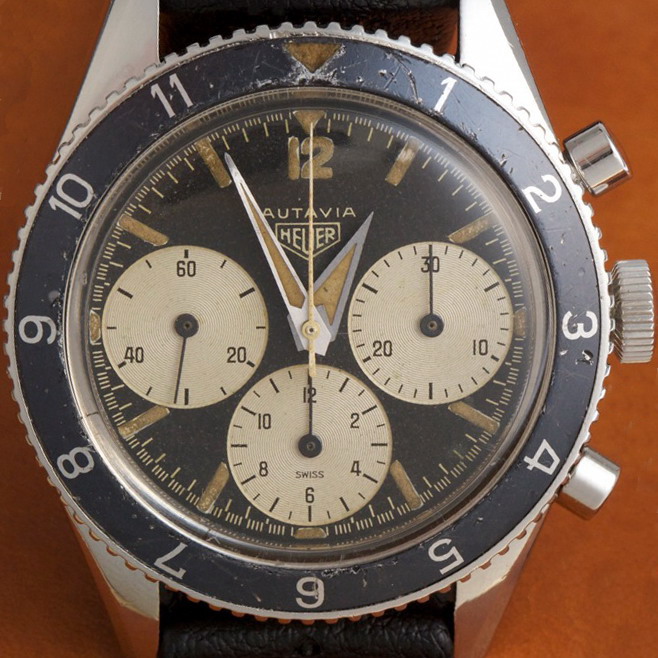